Home / News / Why Solar LED Lights Are Becoming a Trend?

Why Solar LED Lights Are Becoming a Trend?

Traditional lights are slowly being replaced by solar p […]

Traditional lights are slowly being replaced by solar powered LED lights in many applications. Street lighting is one of the most common applications of solar LED lighting. With rising concerns on the depletion of fossil fuels and an increase in greenhouse gases, today, lawmakers across the world are encouraging people and organizations to use solar lights and powered devices. Is that the only reason for the popularity of solar LED lights? No, there is more to it. This post leads you through differences that have paved the way for the easy adoption of solar LED lights across the world.

Solar LED Lights: Why They Have Gained Popularity Over Traditional Lights?
Solar LED lights are slowly replacing metal halide lights or high-pressure sodium lights in streets, stairways, and other places. The following differences would help you understand the underlying reasons for this adoption.

Power Source: Traditional street lights, which are high pressure-sodium lights or metal halide lights, are connected to an electric grid. These grids are powered by electricity, which is produced from fossil fuels or non-renewable sources such as coal.
Against this, solar LED lights derive power from the sun. They are not dependent on any electric grid, rather they are connected to solar panels or photovoltaic modules that absorb sunlight during the day and store it in the battery. This sunlight is converted into electrical energy and is used to power LED lights during the nighttime. Many advanced commercial solar LED lighting solutions offer illumination for over seven nights after a full charge.
Installation Efforts and Costs: Electric grids supporting traditional lights require trenching and cabling, which is generally done under the ground. Although nowadays this trenching and cabling is performed using advanced equipment, still it requires human intervention and time. Combining the costs of labor, experience, and time, the rates may go up to $4500 for the installation of traditional light grid. Having said that, does it mean anyone can install solar lights easily? No, these lights also require expert intervention, but there are several areas where considerable savings can be made. First, these solar LED lights require no grids and are autonomous. Secondly, as the grids are not required, so users can save on the labor-intensive and expensive cabling and trenching process. 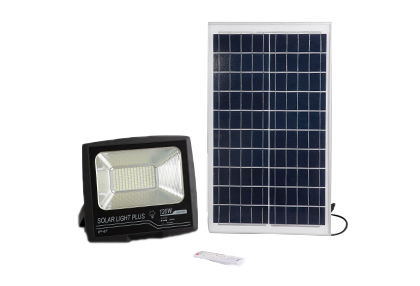 Shelf Life: Traditional lights have a lifespan of 10,000 to 15,000 working hours. Some may even have 5000 to 8000 working hours. These lights also have a high failure rate.
The regular LED lights that we use at home have a life expectancy of more than 50,000 hours. This will round up to 13.5 years of performance if you are using these lights for at least 10 hours a day. Today, many outdoor solar LED lighting applications assure a life expectancy of 80,000 working hours and more, which will round to 15 years or more.
Lighting Efficiency: Solar-powered LED lights can match any color rendering index (CRI), while traditional high-pressure sodium lamps or metal halide lights have a low CRI in comparison. LED lights assure better visibility and can be adapted to different distribution patterns based on the requirement. CRI is the ability of the powered light to reveal the colors of objects accurately in comparison to a natural light source.
Maintenance and Repair Costs: As with any electrical equipment, maintenance and repair costs are a major concern with users of these lights. The traditional metal halide or sodium lights may last for 5 or 6 years depending on the location where they are installed. Also, they may demand regular repairs, as many of these lights are not designed to withstand weather changes. Once these lights reach their lifetime they would burn out instantly. Solar LED lights may last for more than 10 years, and LEDs are more efficient as their power may degrade over time but not burn out instantly, thereby giving enough time for replacement or repair. One of the major maintenance costs incurred with LED lights may be due to batteries that are usually replaced after 5-7 years of service and the cost of these changes may amount to $1000. Also, with new smart technologies in place, the remote management and control of these lights is possible from a single location, which further helps in reducing the maintenance costs by almost 50%.
Impact on Environment: Do you know – traditional lights contribute to 17% of carbon emissions. According to various studies, 830 grams of carbon equivalents are produced from 1KW electricity. A study conducted in 2017 confirmed that LED lights can help reduce carbon emissions by 570 million tons.
All the above factors will help you understand why solar LED lights are being considered as the best alternative options for traditional lights. The solar LED lights combine the best of both – LED technology and solar power. So, if you are planning to replace your traditional lights with solar LED lights, it is important that you source them from a trusted brand like Ningbo Tianyi Electric Appliance Co., Ltd.